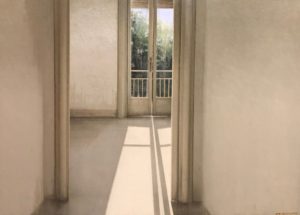 Carlos Morago’s work captures empty and austere spaces, serene and balanced, illuminated with a soft and clear light that allows him to explore a very rich range of grays and whites, which are the most present colors in his palette. He constructs scenes of great lyrical force, impregnated with an enigmatic, almost metaphysical atmosphere. He creates uninhabited and silent spaces with which he shows us that he is a master of absences.

The artist shows great interest in interior spaces. Sometimes, these are observed through half-open doors or windows that, however, are almost completely hidden, playing with suspense and creating disturbing images. At other times, they open up to panoramic views of cities, or give a glimpse of gardens and interior courtyards, where some admirably depicted plant elements provide a contrast that creates a splendid harmony of colors and shapes.

His still lifes are extremely poetic. He paints especially flowers and plants, but also ceramics and other solitary elements that, nevertheless, stand out for their vitality and chromatism on backgrounds that occupy a large part of the composition.

Carlos Morago has been exhibiting at Sala Parés since 2009. His work has been presented on several occasions in France, Germany, Holland, England, Mexico and Belgium, in addition to Madrid and other Spanish cities where he also regularly exhibits. He has received numerous awards and is a Corresponding Academician of the Royal Academy of Fine Arts of St. Elizabeth of Hungary.