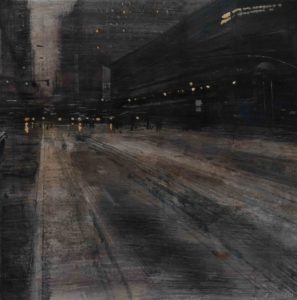 Alejandro Quincoces is an artist with a long career that began in the eighties. His current work focuses on urban landscapes with scenes of streets and rivers, immense panoramic views or vertical visions of cities like New York, Chicago and Bilbao, among others.

He is capable of creating grandiloquent scenes, of great expressive force, in which he manages to communicate a sensation of immensity. His work is rich in nuances despite his use of a relatively reduced palette. His compositions are characterized by the general impression of the scene and its atmosphere, captured from an extraordinary material work. He does not forget to incorporate details that generate rhythms and depth in the work. He often bathes his cities with a twilight that gives them a misty appearance, sometimes illuminating them with flashes of warm colors. Quincoces’ scenes lack human figures and emphasize the industrial areas of large cities.

He holds a degree in Fine Arts from the University of the Basque Country. He has exhibited in major Spanish cities and also in galleries, art fairs and museums in Germany, France, Switzerland, Italy and the United States, and has been exhibiting at Sala Parés since 2008. He has been recognized with many awards, and his work is included in numerous important collections, both private and museums and foundations.