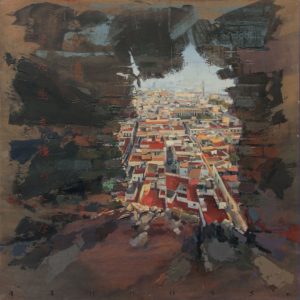 Albert Vidal’s work is a magnificent example of the validity of landscape in contemporary painting. He deals especially with urban landscapes, which he often depicts through aerial views in which the rational structure of buildings and the urban fabric can be appreciated. Sometimes he also portrays the destruction caused by war, interpreting the bombing of some German and Japanese cities of the past with his modern language. He also works with de-anthropized landscapes, such as seascapes or desert landscapes, in which the lack of figurative elements and his expressive and vital style seem to want to bring us closer to abstraction.

The artist focuses on the structural elements and the composition, which has a great protagonism. He usually blurs some areas of his boards and even leaves visible parts of the support, on which he has sometimes printed fragments of newspapers, advertising leaflets or other elements, which together with his peculiar way of signing the works – with a numerical code – create an interesting contrast between the analogical and the digital. Sometimes he complements the subtle materiality of his painting with assemblage, which allows him to create different textural and chromatic qualities.

Albert Vidal’s career has led him to win awards in various competitions and to exhibit in different cities in Spain, as well as in France, Japan, Switzerland and the United States. In Barcelona, he has been exhibiting at Sala Parés since 2001 and has made some installations in public spaces.