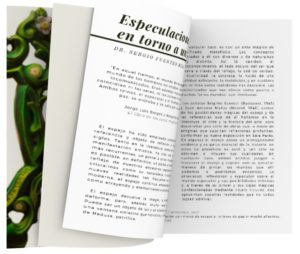 «In those days the world of mirrors and the world of men were not, as they are now, cut off from each other. They were, besides, quite different; neither beings nor colours nor shapes were the same. Both kingdoms, the specular and the human, lived in harmony; you could come and go through mirrors»

The mirror has been constantly used as a reference and object of reflection throughout centuries. In literature as in any other artistic manifestation, it has been one of the most recurrent objects, a portal to other worlds where everything is possible, in short, a portal to infinity. Whether it is the reflection of our ancestors captured in the crystalline waters or its initiatory nature opening new realities so prevalent in modern literature, the mirror continues to emanate mystery, as well as to attract and frighten in equal measure.

The mirror returns the image, transfigures and deforms it, but also conceals, reveals and preludes it. It can be an object of light and an oracle, but also a sinister window that horrifies and, like Medusa’s gaze, petrifies. In any case, it is almost a magical entity of metaphysical significance. The concepts associated with it are diverse and have a very different nature. Thus vanity, self-knowledge, the dark side of selfness that emanates through the reflection, the thirst for truth, duplicity, surprise, the escape from an asphyxiating reality, the curse, and an endless list of other realities. The possibilities it offers as a gateway to many «other worlds» are limitless.

Brigitte Szenczi (Budapest, 1943) and Juan Antonio Mañas (Madrid, 1946) use the magical possibilities of the mirror and the references we find in literature, cinema and art history to develop a series of works which, like enigmas that provoke profound reflections, make up their new exhibition at Sala Parés. In some of them, the mirror is an obvious central character and an essential part of the story; in others, its presence is subtle and its qualities are only guessed at or intuited. In any case, both artists play at piercing the mirror and capture, with their peculiar way of painting, the worlds that we can or could find there. They navigate, reflect and speculate on the specular world and its infinite possibilities and, through their paintbrush and their magic boxes made from objets trouvés, they bring us closer to those realities that not everyone manages to admire.

Szenczi and Mañas have been working together since the mid-seventies. Although they each produce their own works individually, the symbiosis between them is absolute, as they share themes, concerns and plastic approaches and always establish a rich dialogue that has served to create a unique joint pictorial universe. Far from fashion, they have always remained faithful to their personal language, to their idea of painting as an open door to metaphysical reflection through scenes of philosophical, sometimes esoteric content. Combinations between different worlds and realities, the dreamlike elements that appear in the earthly world as ghostly presences or the suggestive connection of different a priori unrelated elements are some of the recurring formulas in the paintings of Szenczi and Mañas. With them they construct the compositions and the mysterious contents. These mechanisms, treated as games and philosophical challenges that are spun in order to weave a web of unfathomable enigmas, offer them endless plastic and expressive possibilities and allow them to alter and multiply reality with total freedom, surrendered to mystery. Both consider painting almost as an occult science in favour of deep reflection and reconnection with memory and the unconscious as lost paradises. In this sense, Szenczi and Mañas’s conception of painting as language is closely linked to the magical essence of the mirror. Like this mysterious object, the painting of both is conceived as a portal to other inexhaustible planes of reality. 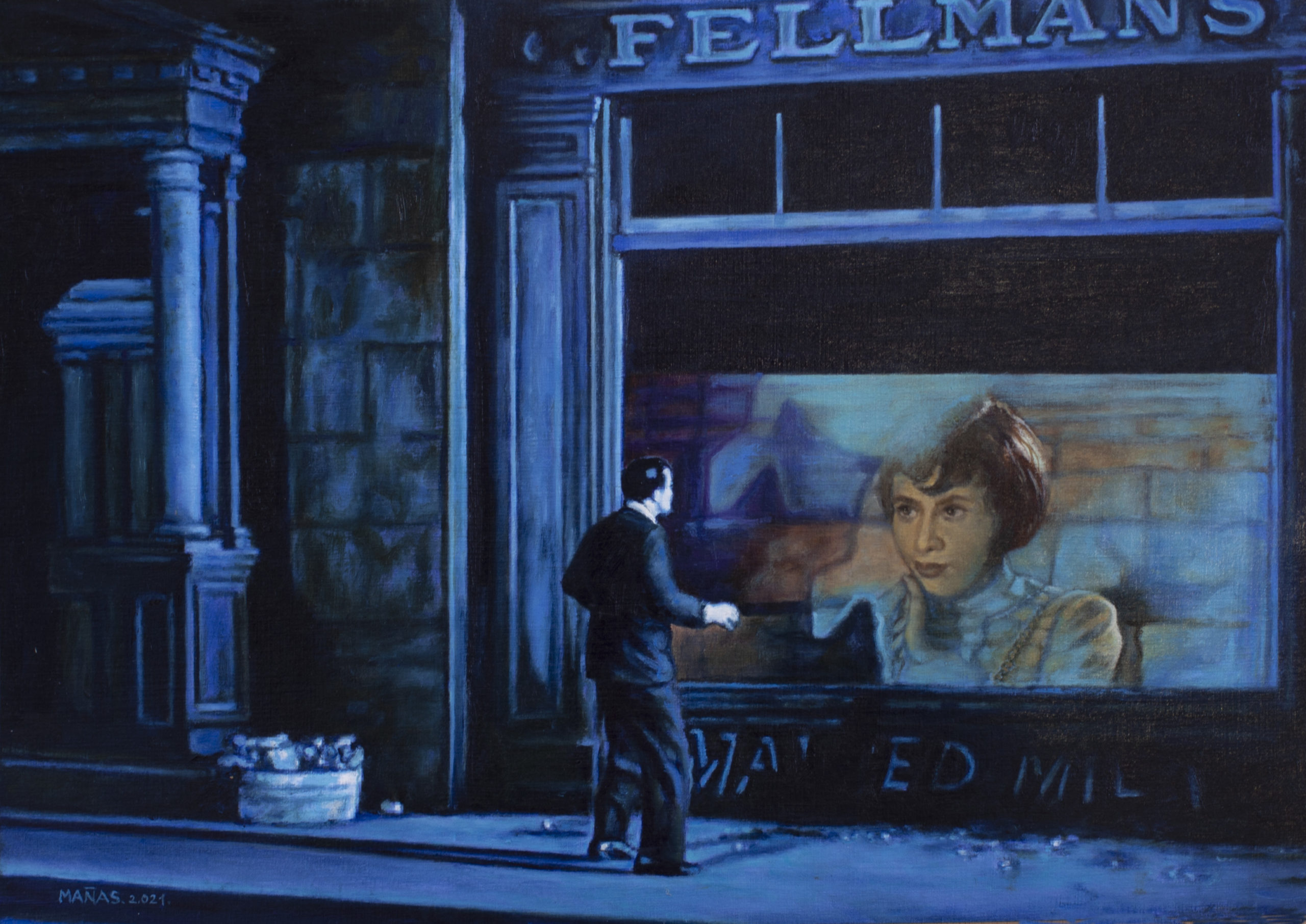 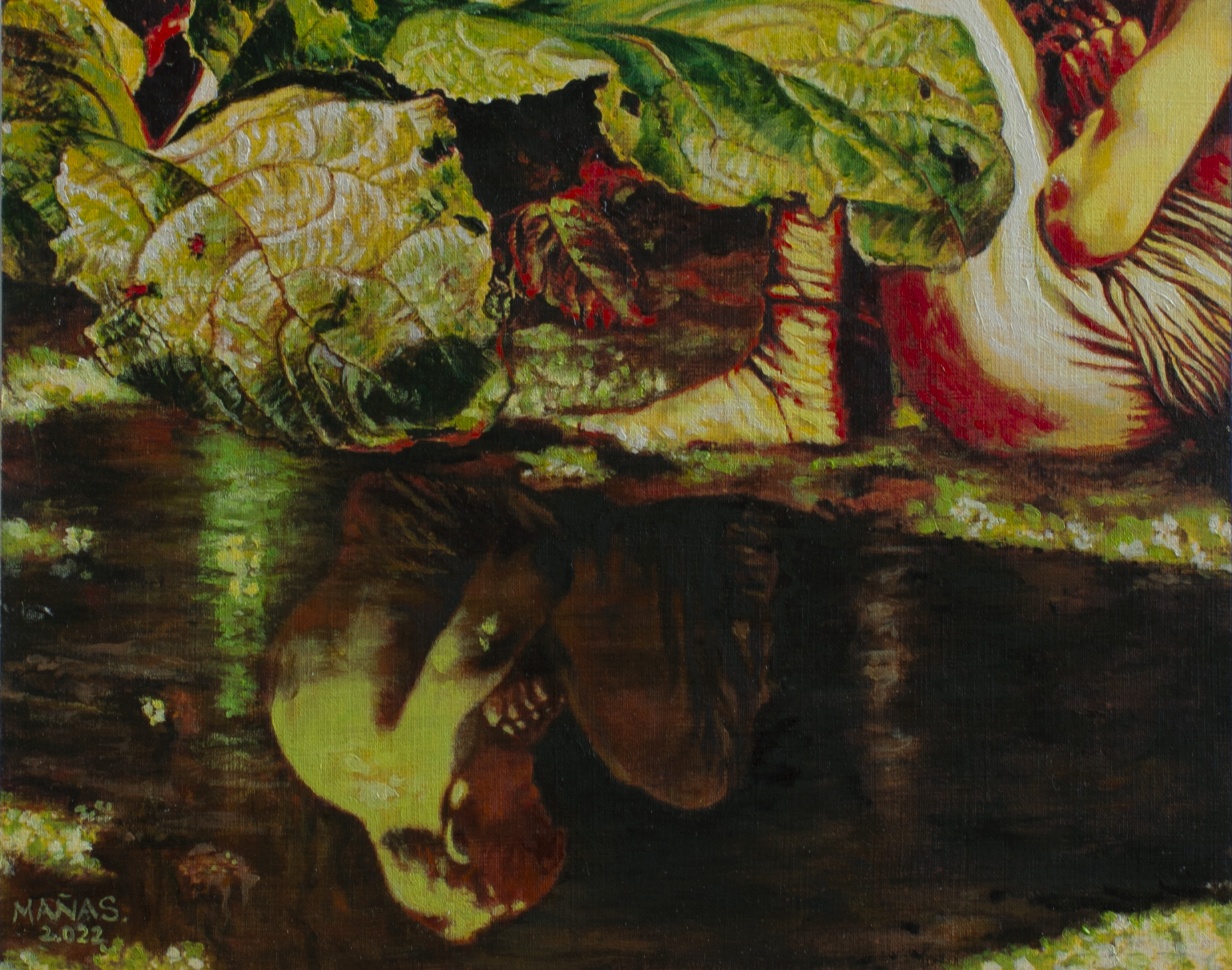 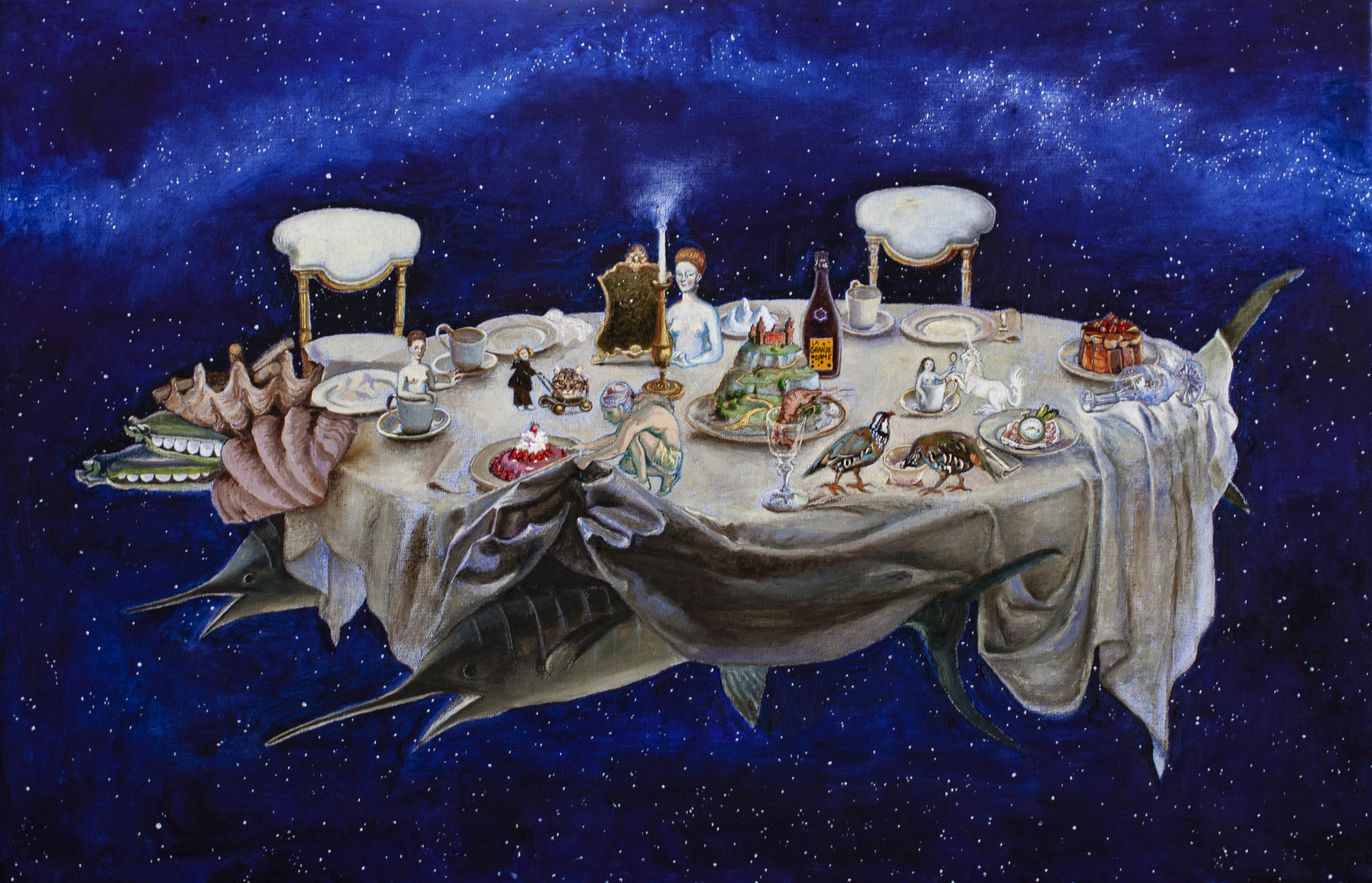 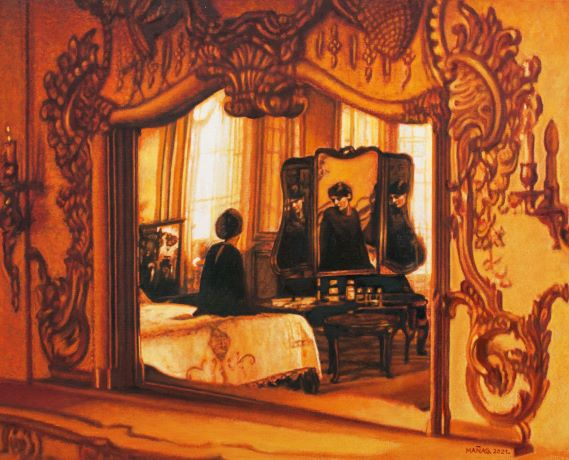 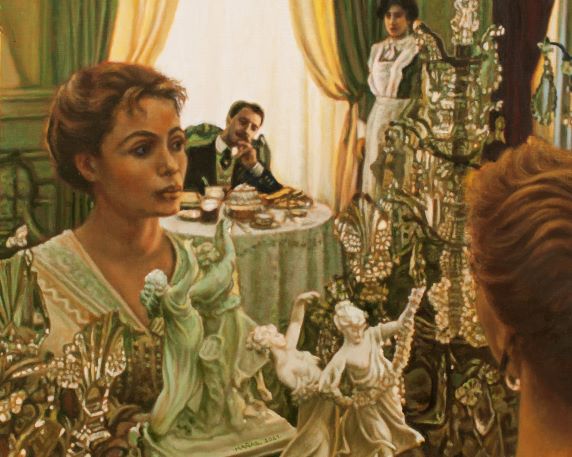 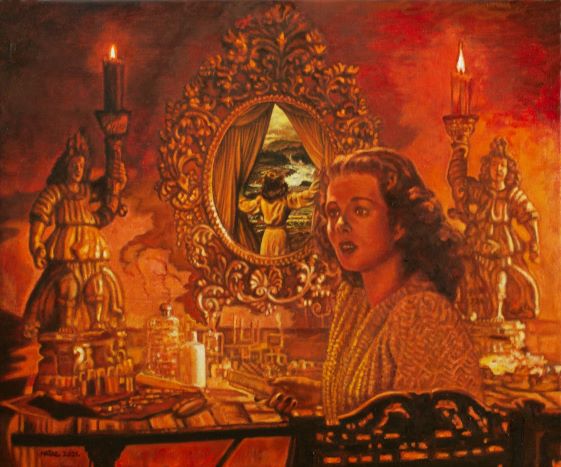 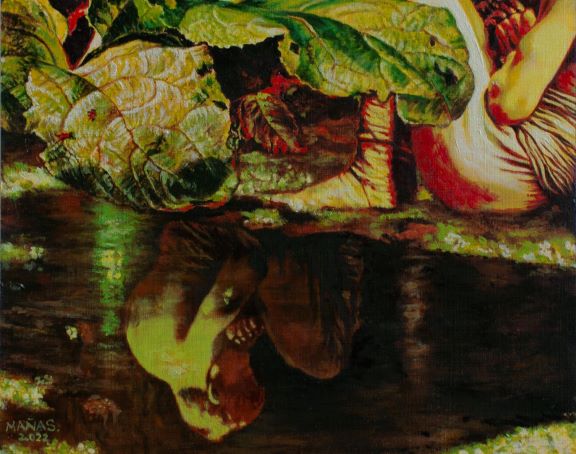 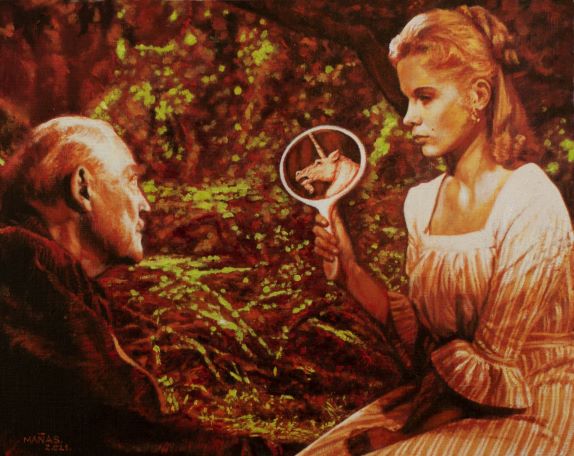 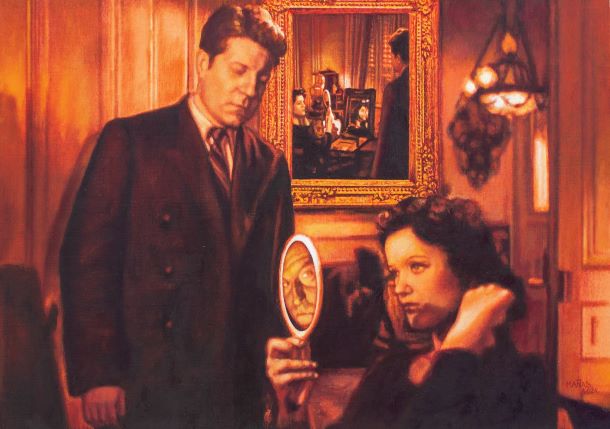 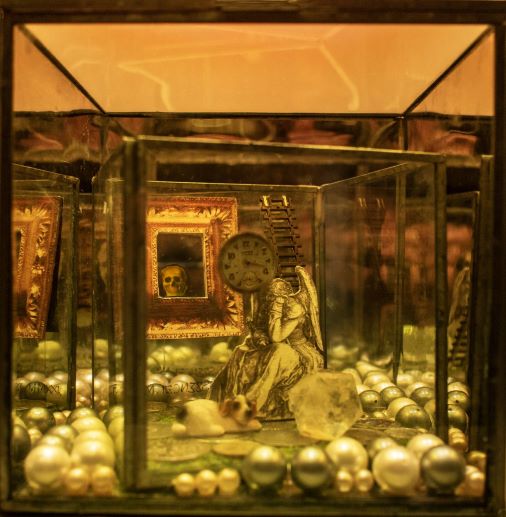 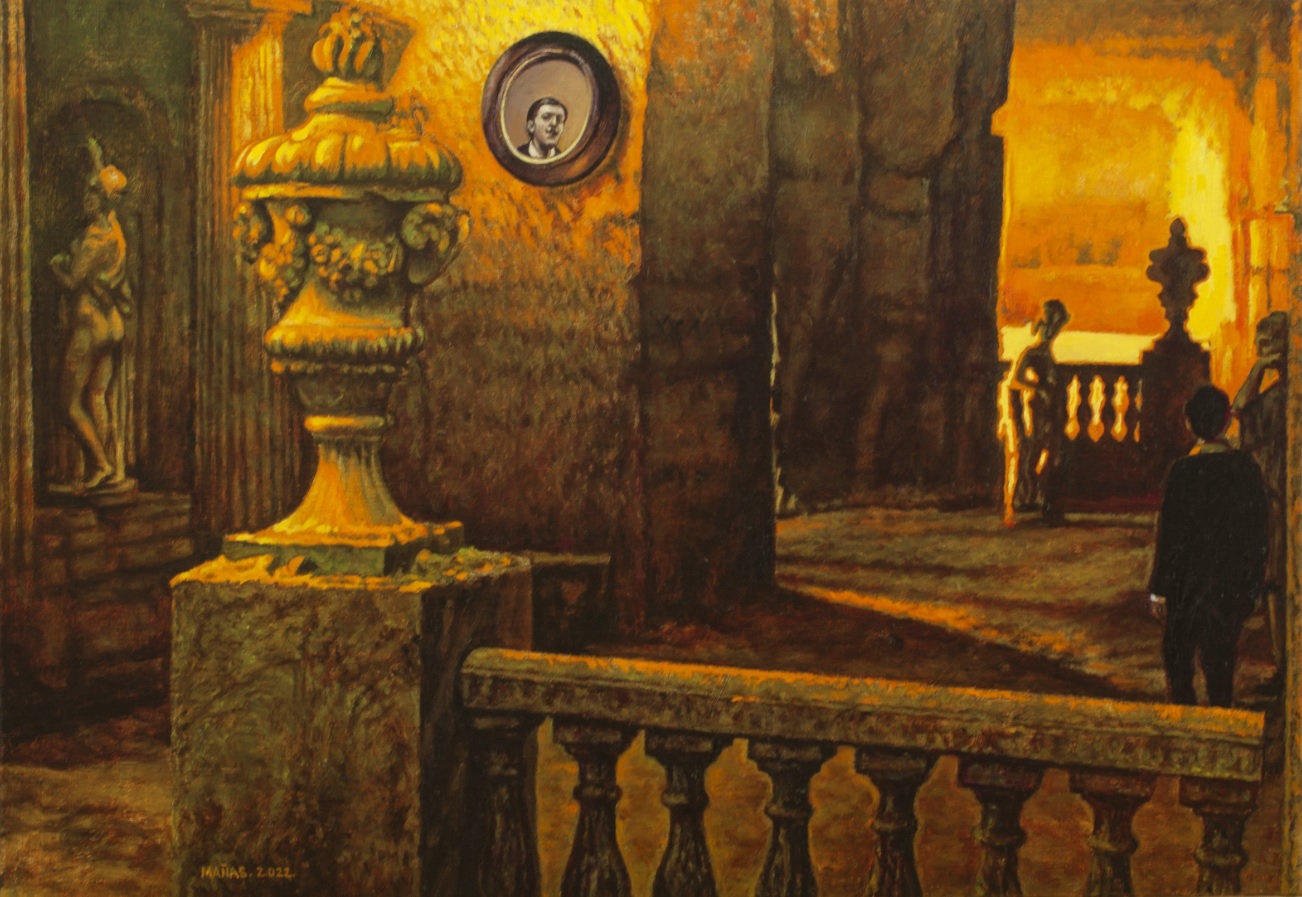 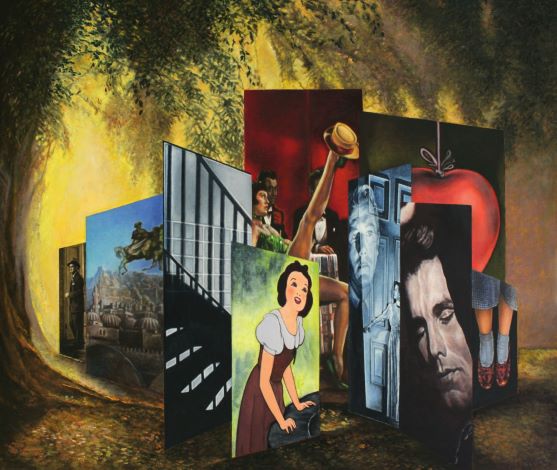 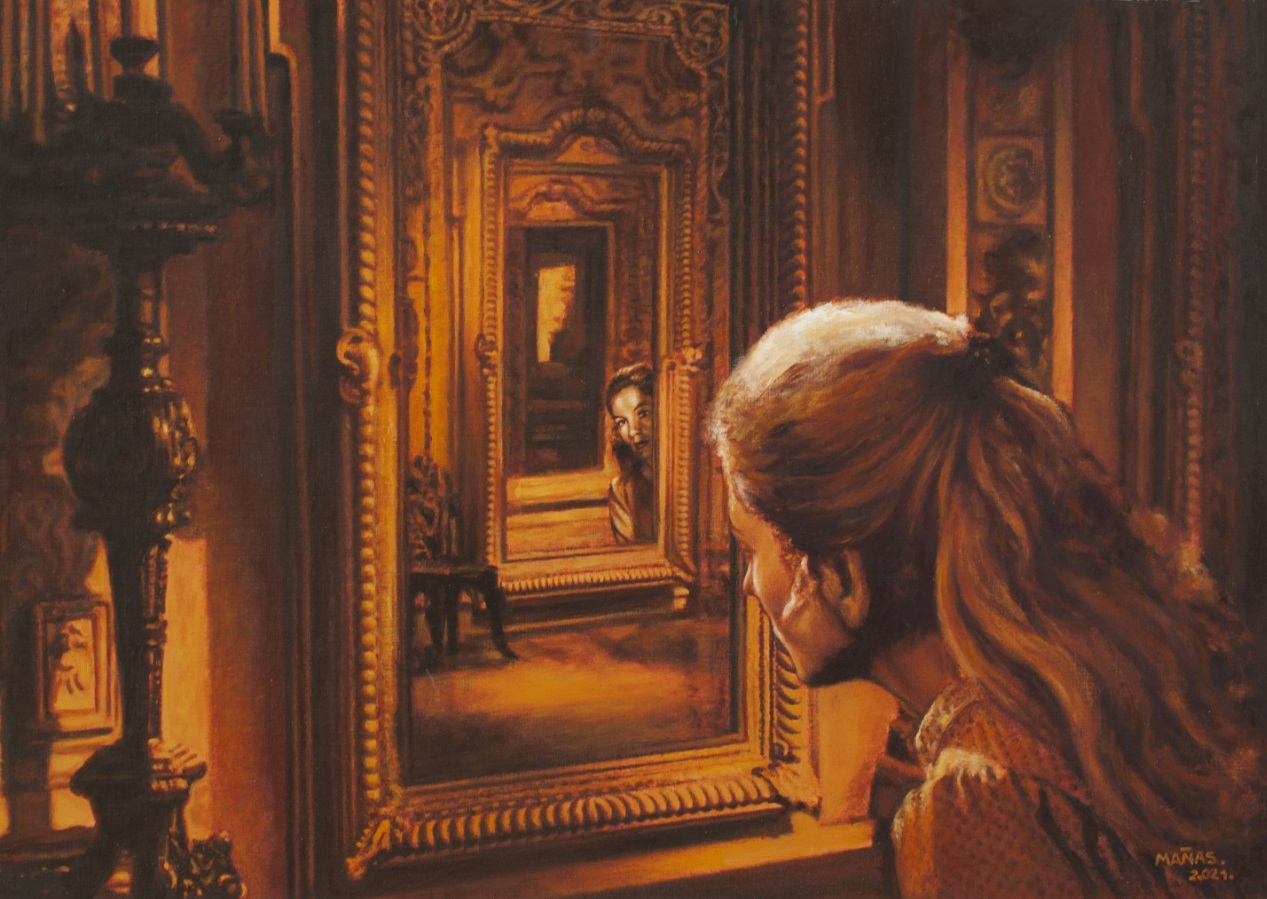 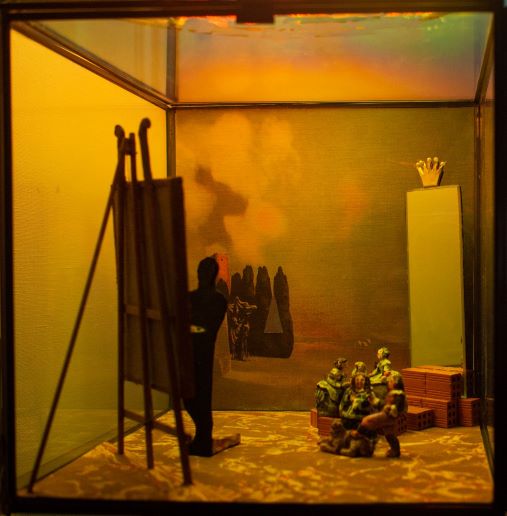 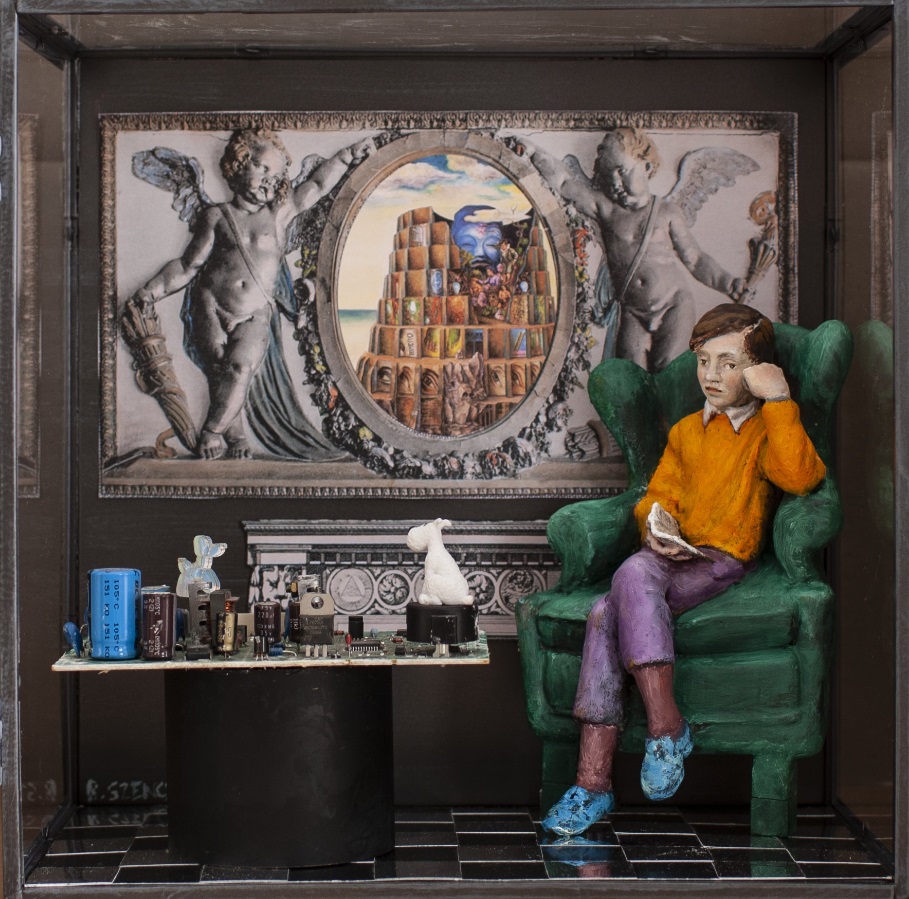 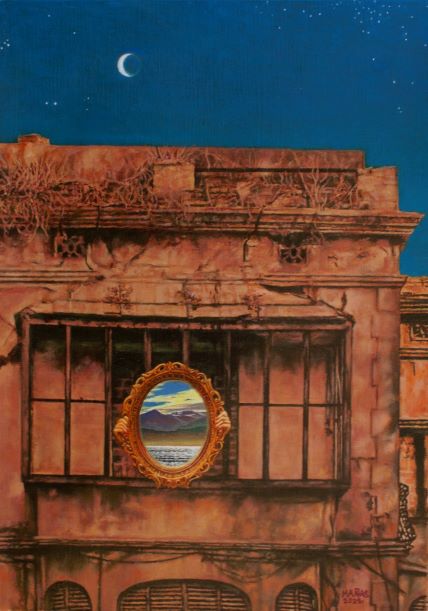 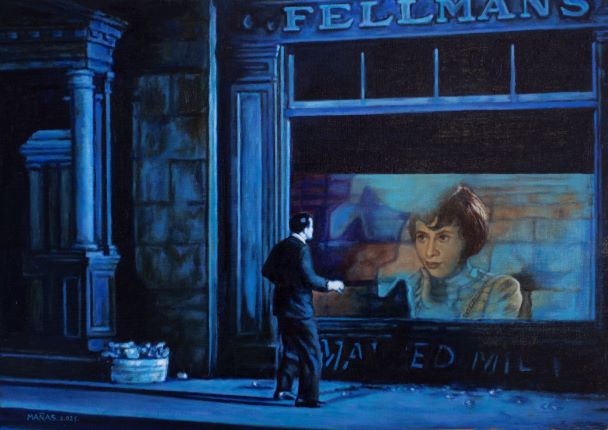 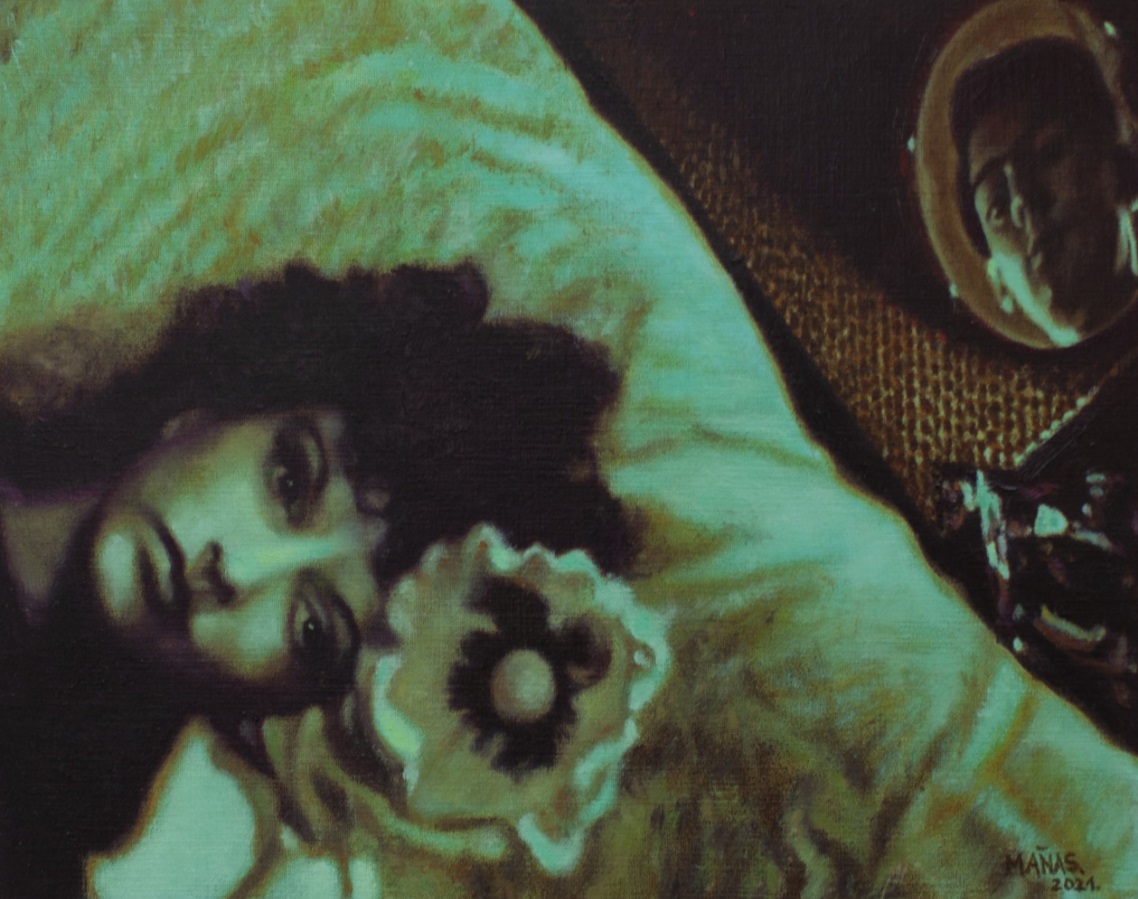 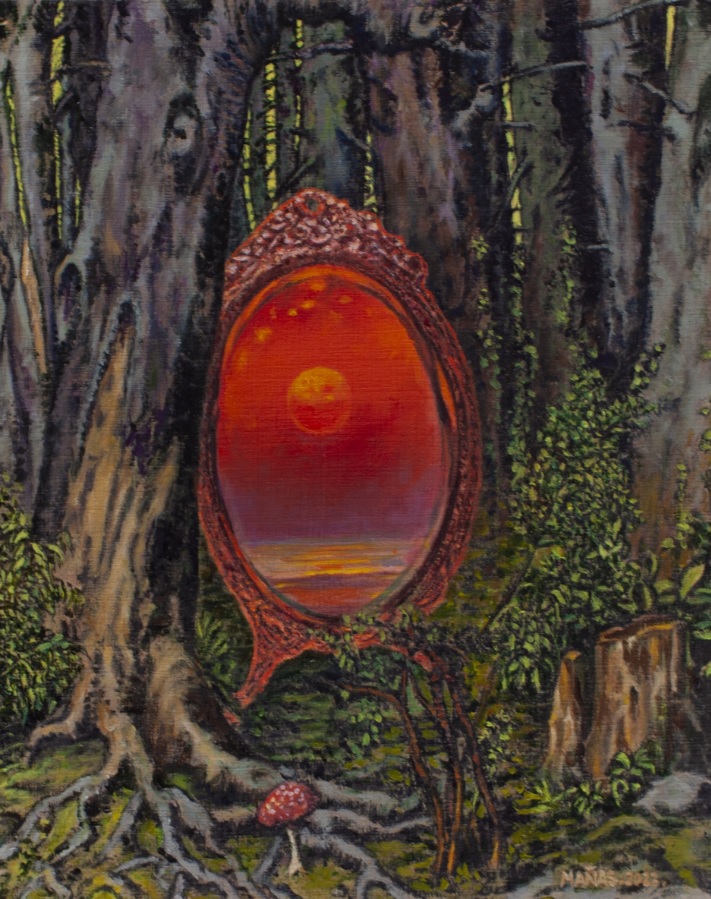 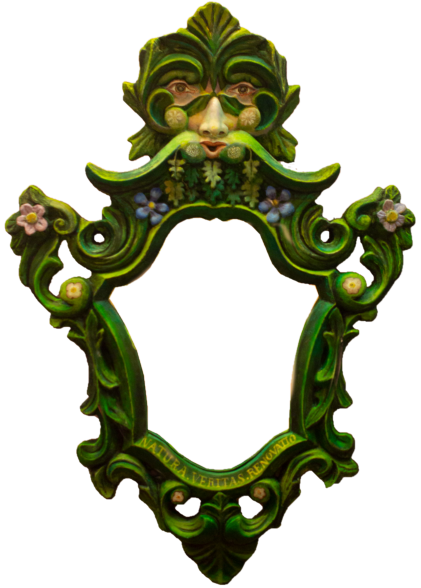 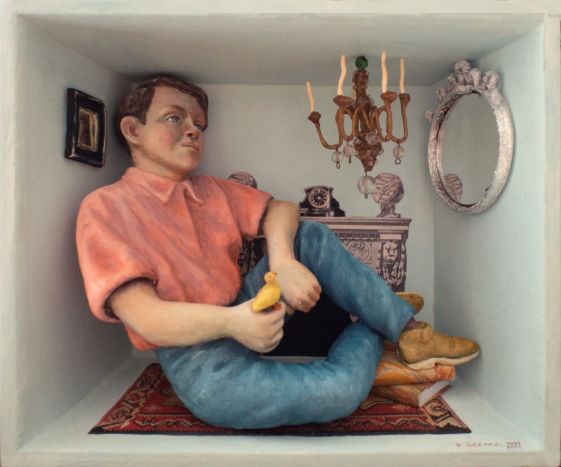 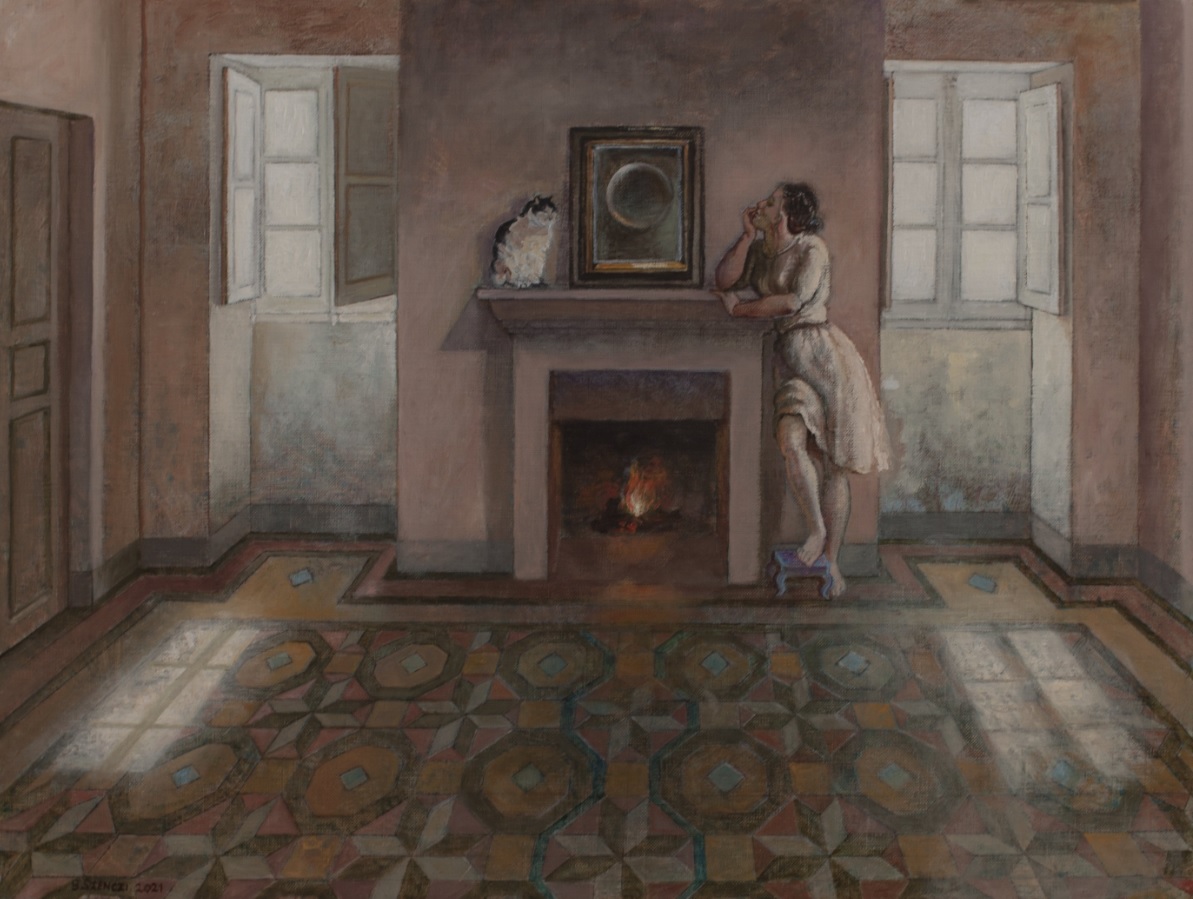 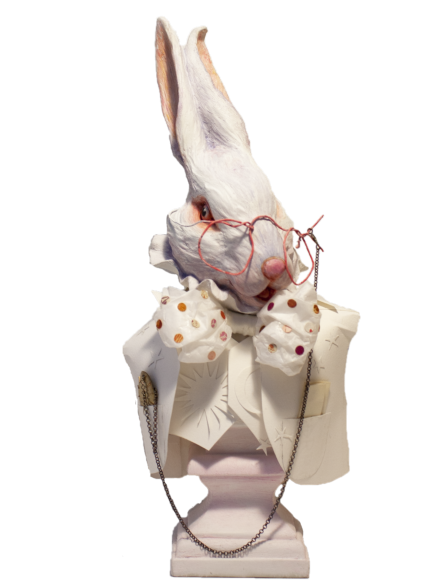 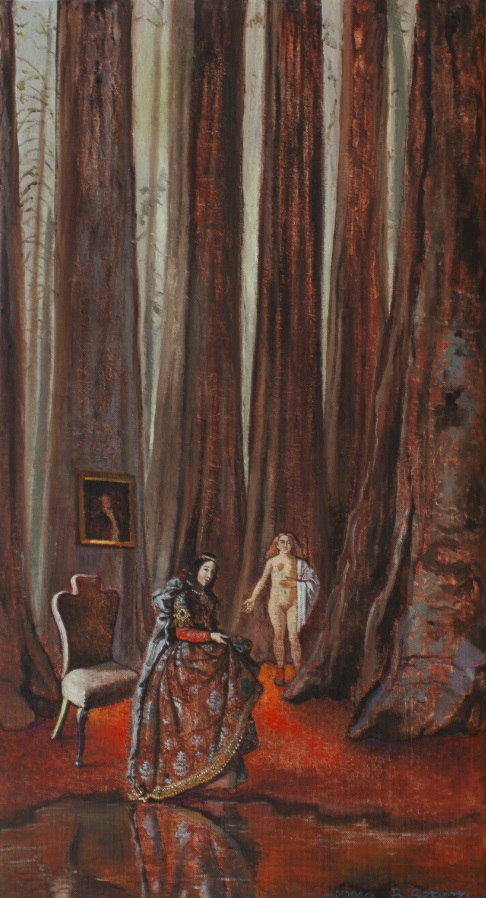